The station opened on 10 March 1925. Until 14 February 1926 it was the eastern terminal of the line. At that date the extension to Odéon was opened.

The underground station is situated in the 6th arrondissement. It has no connections.

Mabillon is now served by the metro line 10. The station takes its name after Jean Mabillon (1632 - 1707), a Benedictine monk and scholar who died nearby. 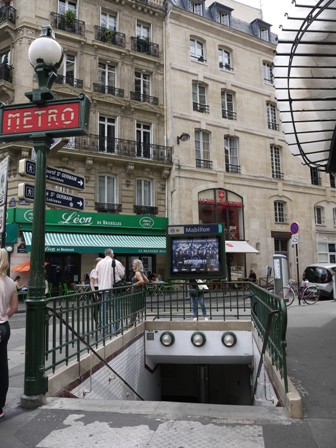 The enclosure is made of green metal bars of uneven lengths. The station sign is a square box with the station name and Metro number in the top quarter. In the lower part is an advertising poster.

The walls of the entrance are tiled in white.

Hand rails have been fixed to both walls. Three round lightes in green fittings have been added at the end of the entrance. 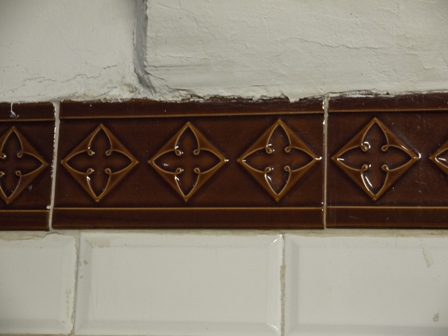 The border in the corridor is made of brown ceranic tiles with three diamonds with stylised flowers. 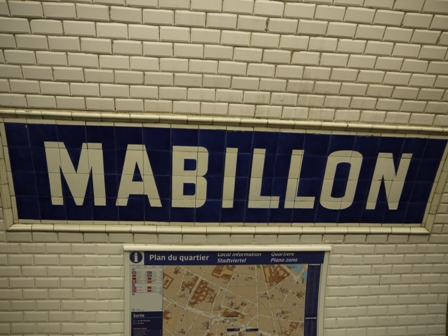 The signage is made up of a panel of 4 by 16 dark blue square ceramic tiles in a frame made from white curved ceramic tiles.

The station name is burned onto the tiles in large white capital letters.

Underneath is a frame with a map of the local area.

The walls are tiled in white ceramic  tiles with a raised centre. 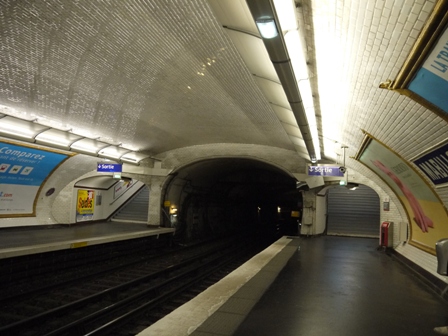 Entrance from to the platform is from the end.

The two side platforms have no platform barriers.

The edge of the platform is marked with a broad white line and a row of grey plastic with raised circles. The ground is painted grey. 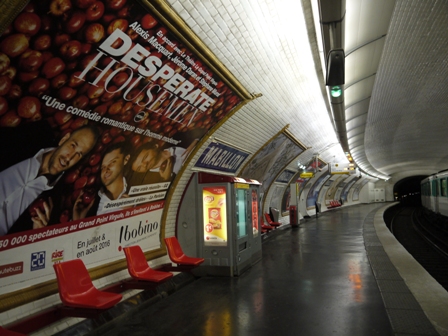 The platform lies in a bend.

Red plastic seats have been fixed to a red metal bar on the wall. They have been placed in front of advertising frames.

The advertising frames have little flower decorations at the upper corners. Unlike similar frames at other stations, they do not have a larger moulding at the topf centre of the frame.

The silver lights are in the style of Bruno-Gaudin.

A vending machine with sweets and drinks can be found on the platform. 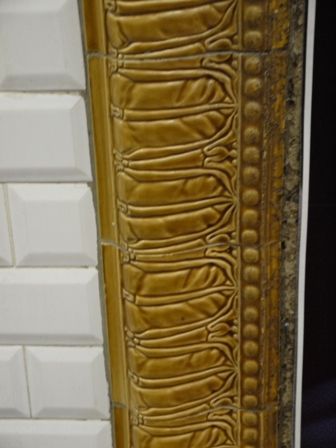 Details of the advertising frame.

The honey coloured ceramic frame has a pattern of cabbage leaves pointing inwards and a row of semi-pearls.