It is situated on the border of the 8th and 9th arrondissements and is accessed from what is now known as rue de Liège.

It is served by the metro line 13.

When the underground station was opened it was given the name Berlin, however this was changed during the First World War when it reopened after several months of closure.

The station was again closed at the beginning of the second World War, reopening in 1968.

In 1982 the station was refurbished. A series of 18 paintings of the Liège area were painted on ceramic tiles and placed on the walls behind the tracks. 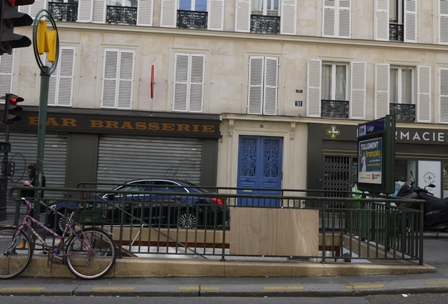 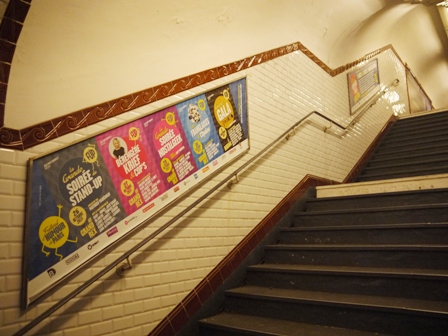 The border around the entrance is made of green metal bars of the same size fixed to a stone base.

At the entrance is a silver steel pole with a double circle on top. Inside is a yellow letter M. 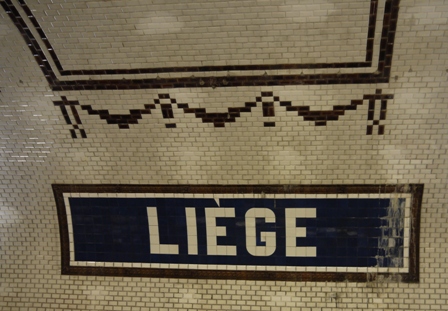 The walls are tiled in white tiles with a raised centre.

Some slim advertising boards have been placed between the metal handrails and the the brown border tiles. The border tiles are decorated with a wave pattern.

The upper walls and ceiling are painted white.

The signage is made of blue square tiles in which white tiles have been inset to spell Liège in capital letters. It is sourrounded by a white frame and a brown frame made of ceramic tiles with a pattern of olive leaves. The first letter E has an accent. 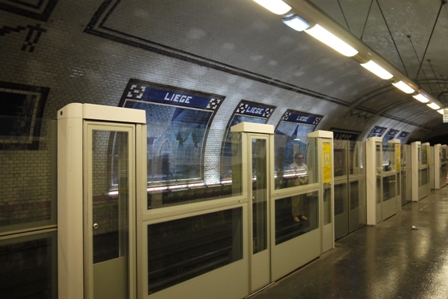 Platform doors have been installed. Lights are hanging by pairs of two wires from the ceiling.

The ground is painted in grey. 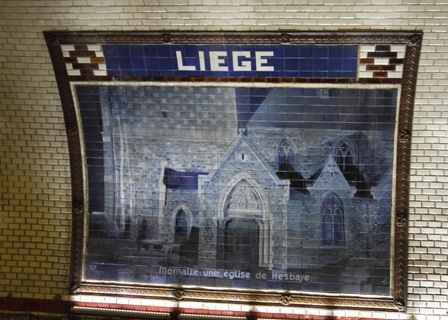 The paintings on the northbound quay - direction Asnières and Saint-Denis - have been created by Daniel Hicter.

They are held in different hues of blue.

The paintings are in a frame of brown ceramic tiles with olives leaves and the logo of the Nord-Sud company integrated.

The station name and two patterns in white and brown tiles have been added to the painting.

Momalle - a church in Hesbaye 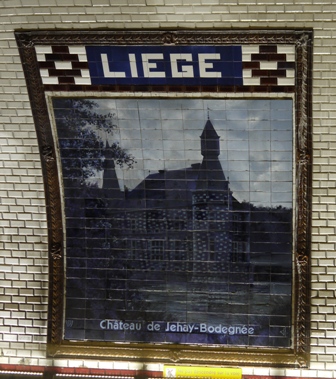 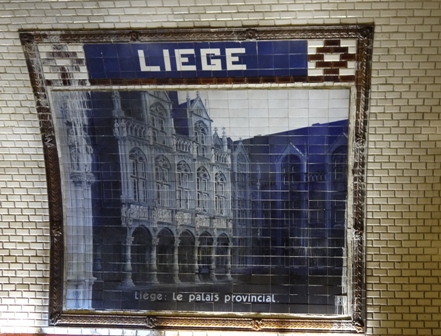 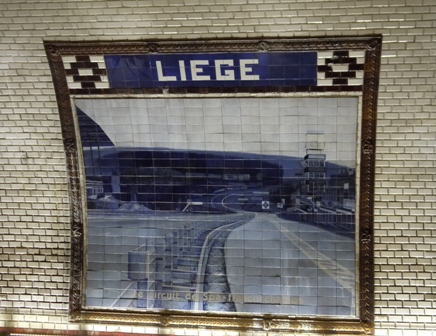 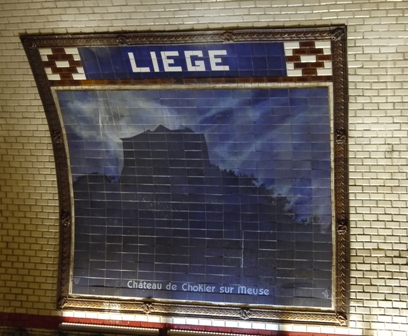 Choker Castle on the Meuse 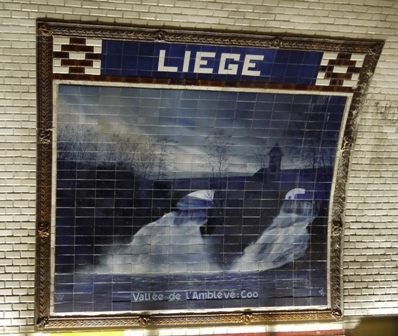 Coo in the Amblévé Valley. The bridge is built over the waterfall. 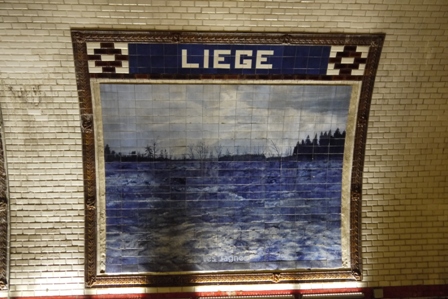 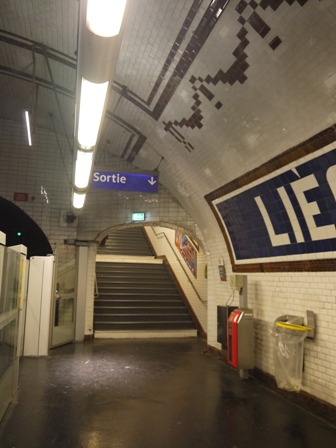 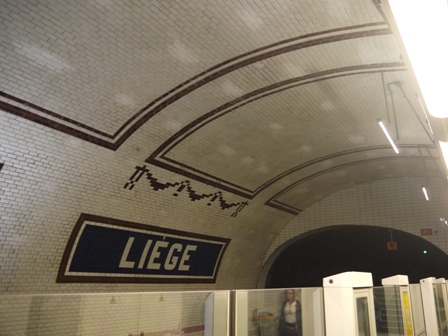 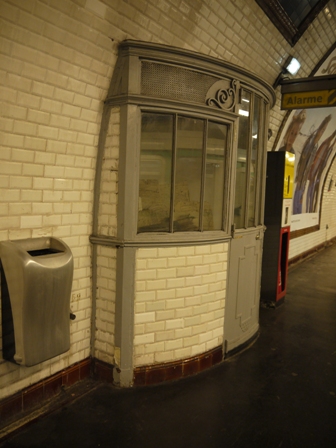 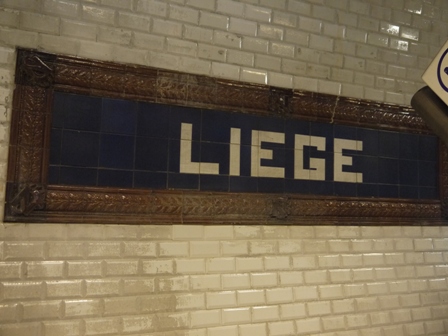 Les Fagnes - The Fens are a moorland and woodland region at the east of the country. 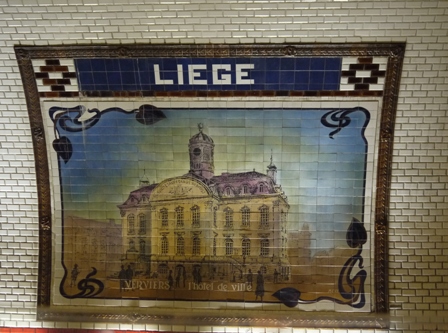 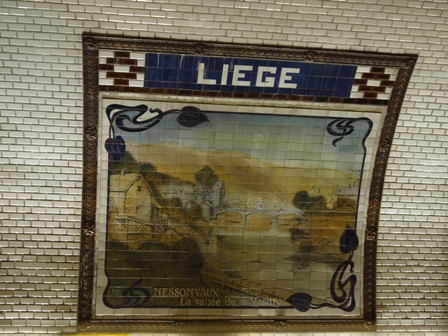 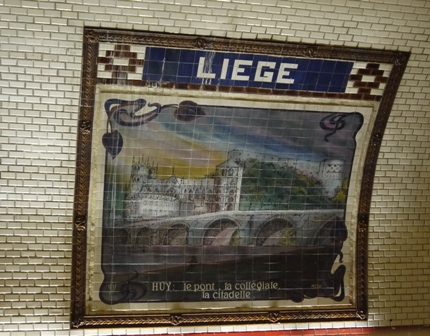 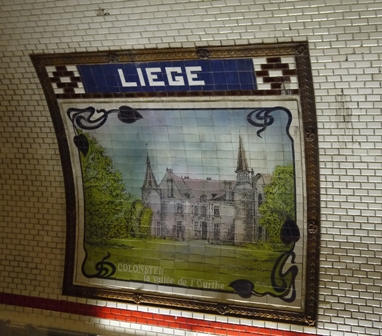 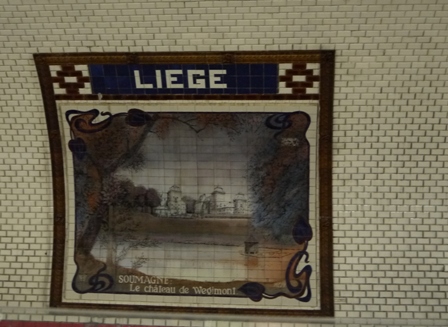 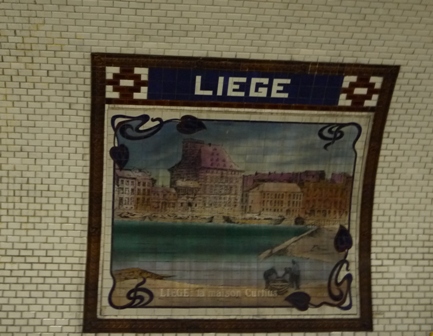 The platform still has one of the former station master offices. 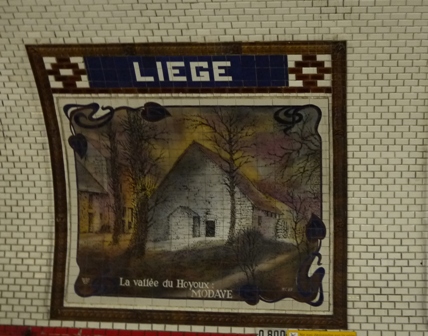 The station name is printed in capital white letters on square blue tiles. The first letter E has no accent.

The sign is surrounded by a brown border of olive branches.

The paintings on the southbound quay - direction Châtillon - Montrouge - have been created by Marie-Claire Van Vuchelen. Her paintings are in colour and include an art nouveau flower frame.

The station name and two patterns in white and brown tiles have been added to the painting, as well as the brown ceramic frame with olive leaves.

The town hall of Verviers.

Huy - bridge over the river Meuse, the collegiate church and the citadel.

Colonster Castle in the Ourthe valley. It is now part of the University of Liège.

Liège - The Curtius House at the water front.

The Hoyoux Valley - houses in Modave.