The underground station Charles Michels opened on 13 July 1913. When it opened it was one of the terminals of the M8 and carrired the name Beaugrenelle. In 1937 it was reassigned to be part of the M10. In 1946 the station changed its name to comemmorate Charles Michels (1903 - 1941), a trade unionist and communist militant. 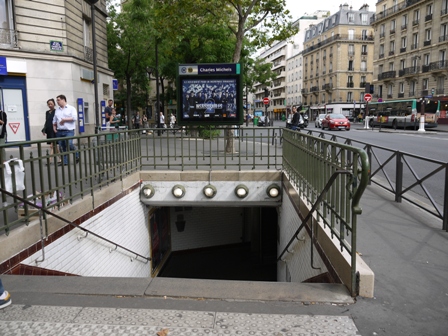 The station is situated in the 15th arrondissement, on the left bank of the river Seine. It is served by the metro line 10 and has no connections with other lines.

The entrance to the station is surrounded by a plain green metal fence made of vertical bars of different lengths and topped with a level bar.

Attached to the enclosure is the rectangular station sign. It consists of a lit frame with changing advertising and the station name and the lines that deserve it above.

Metal handrails have been fixed to the sides.

At the end of the entrance - at ground level - are five round lights in green metal fittings. 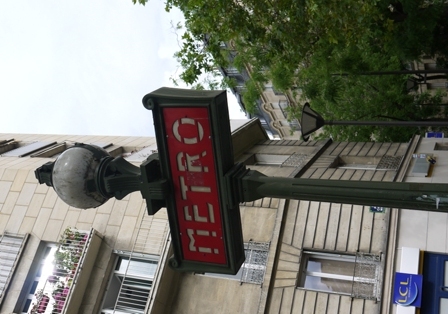 The green lamppost has a red Metro sign with white lettering which light up at darkness.

On top of the lamppost is a white globe light. 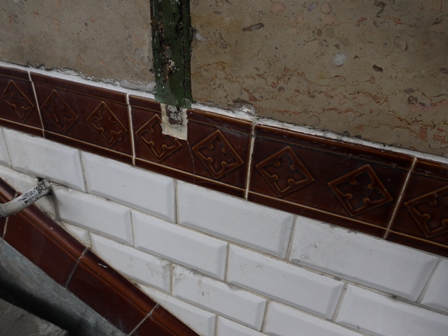 The walls of the entrance are tiled in small white rectangular ceramic tiles with raised centres.  The border tiles are dark brown with two embossed diamonds with cross per tile. 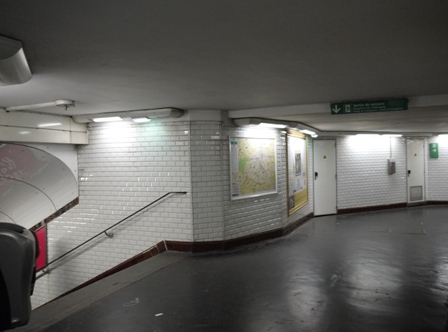 The corridor leading to the platforms has a relatively low flat ceiling which is painted white.

The walls are tiled in small white ceramic tiles of the Metro style. There are only border tiles near the ground. They are plain dark brown.

On the wall is a map of the network in a white ceramic frame.

The floor is painted with grey non-slip paint. 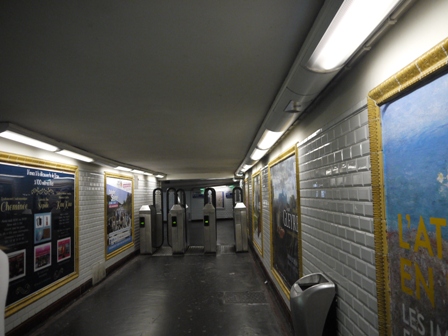 Two row of LED light tubes have been attached on the sides of the flat, painted ceiling.

At the end of the corridor are stands for three moving exit barriers. 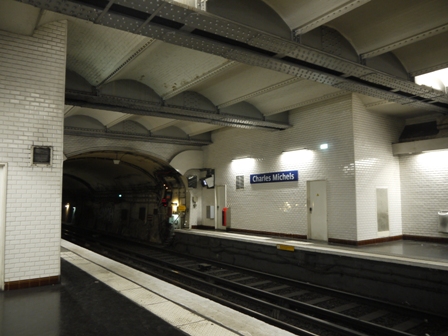 The entrance to the tunnel shows the signalisation. The arch of the tunnel is shallow.

The ceiling is made up of several small, tiled arches. They are supported by several silver coloured beams.

Along the edge of the platforms are two white wide lines to mark the edge. 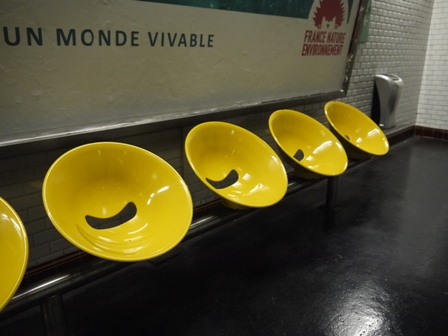 The seats in this station are bright yellow metal half-spheres with a slit, making them look like smilies. They have been placed in a row on a stainless steel bar, which has been fixed to the ground.

Behind them is a large advertising board in a metal frame. 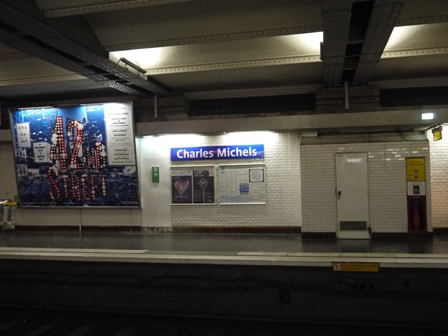 The signage is a blue plasticised sign without a frame. The station name is printed in mixed white letters.

The metal advertising boards are fixed to the wall in an angle and reach into the ceiling arches.