The underground station opened on 1 September 1900 with the opening of the line 1. It is served today by the metro lines 1, 2 and 6. 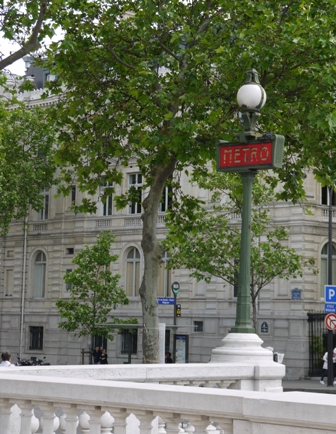 It is situated at the intersection of the 8th, 16th and 17th arrondissements. The station serves the top of the Champs Élysées and the Arc de Triomphe, which is located in the centre of a large roundabout.

The station was originally named Étoile. It changed its name on 21 February 1970 when the square under which it lies changed its name. The station takes its name from the former president of France - Charles de Gaulle (1890 - 1970), who died later that year. Étoile means Star in French.

The ballustrade of this entrance is made of light-coloured stone with rounded 'bars', similar to those on pont Alexandre III.

On the pillars on the top of the entrance is a green lamppost with a white round light at the top. The letters METRO are carved from red glass and placed in a green frame that is integrated in the lamppost. Behind the red glass is white glass. 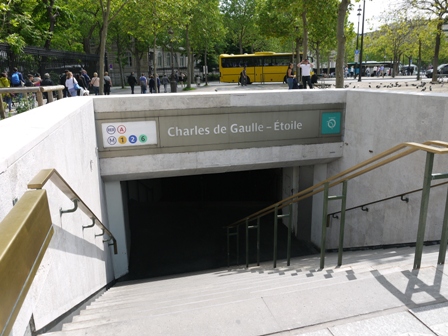 This entrance is surrounded by white stone walls.

On the walls, as well as in the centre of the stairs are gold coloured handrails.

The station sign is integrated in the wall above the entrance. It shows the train line A and the three metro lines 1, 2, and 6. In the centre is the name Charles de Gaulle - Étoile, and to the right of it the logo of the RATP. 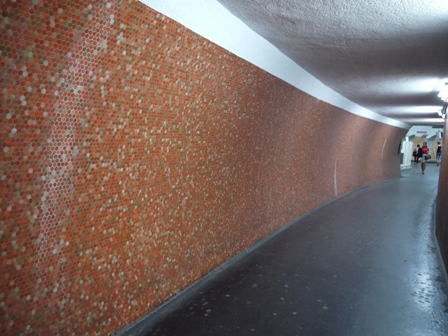 The walls in the corridor are curved. They are covered in thousands of small hexagonal tiles in brown tones.

The top few centimetres and the flat ceiling are painted white.

The ground is painted grey. 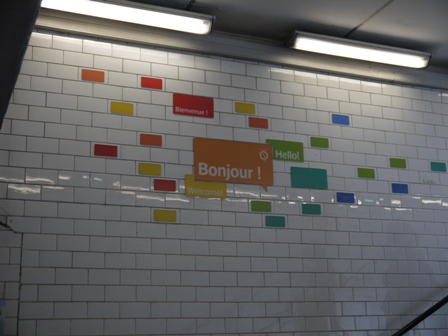 The walls in this corridor have been tiled in flat white rectangular tiles.

The walls have been decorated with coloured signs in English and French saying "Hello" and "Welcome" and some smaller plain coloured plastic rectangles. 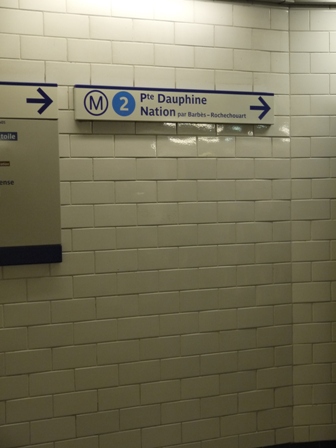 Direction sign to the line 2 in corridor. Both the lines 6 and 2 have Nation as a terminal; so the sign clarifies that the line 2 goes via Barbès - Rochechouart. 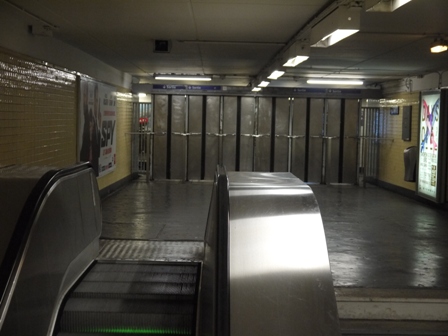 Exit from the station. Four solid metal swing doors are fixed at the end wall. The doors swing open in the middle when a pressure pad on the ground is pressed.

The walls have been tiled in small square pale yellow ceramic tiles. The tiles have a diagonal cross pattern.

Lights are fixed on the the ceiling in several rectangular boxes.

An escalator has been installed next to the stairs. 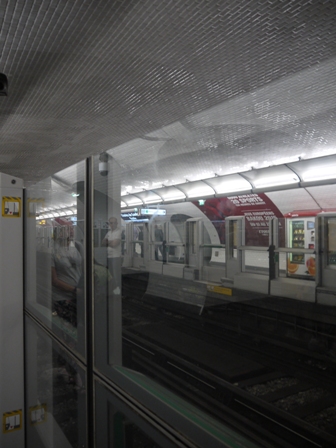 As a result, platform-edge doors have been installed on the line.

The light are set in metal frame along the platform edge. They uplight and reflect on the top of the metal. 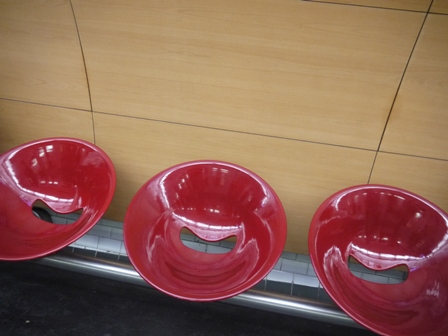 The red metal seats are fixed on a silver metal bar to the the bottom to the wall. They are half-bowl shaped with a smilie slit. 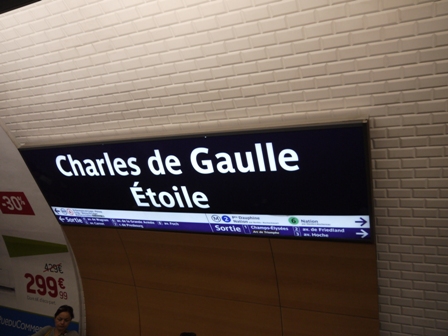 The signage, directions to the exits and connecting lines and a wooden panel form one unit and are placed behind some seats.

The walls are tiled in "Metro Style",that is small rectangular ceramic tiles with a raised  centre. 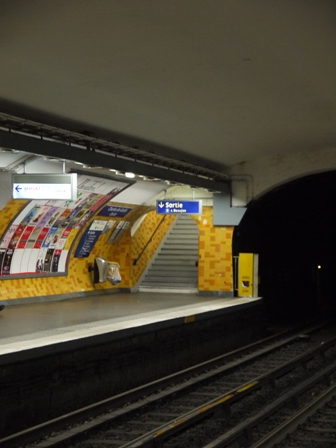 The vaulted ceiling is painted white.

The edge of the platform is marked in white, with no additional yellow line. A row of about 20 cm wide nobbed tiles has been added to warn sight-impaired travellers of the edge. 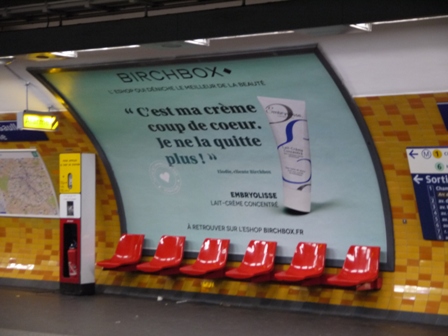 The red plastic seats are fixed to the wall with a bar. The advertising board behind it is in a metal frame.

The walls are tiled in light and dark orange rectangular ceramic tiles. 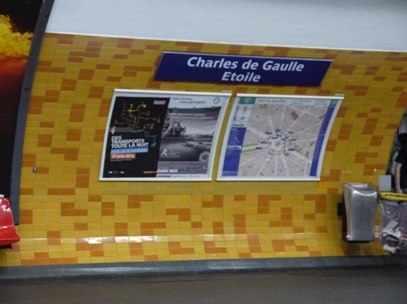 The signage on platform is in mixed case with white letters on a dark blue background.  Underneath it are two white frames with information of the transport arrangements for the night of the 21 June (Night of the music - nuit de la musique) and a map of the local area.

The signage on line 6 is in all uppercase white letters on a blue plastic sign without frame.

The walls are tiles in rectangular tiles in different shades of yellow. 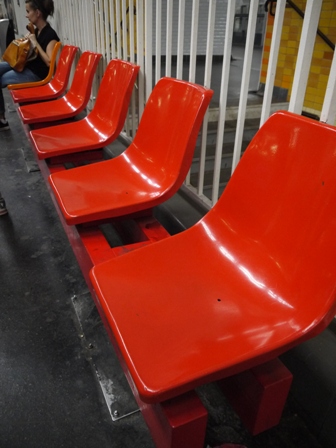 A row of red plastic chairs has been attached to a red metal bar fixed to the ground in front of the  white fence, which separates the stairs from the platform. 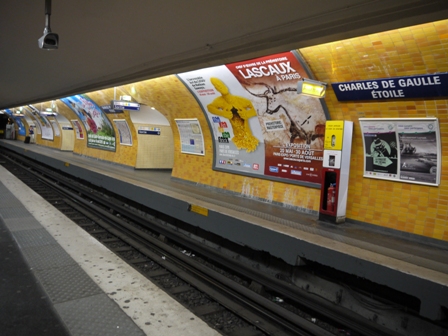 The narrow platforms are on either side of a single track.

The edges are painted white, followed by a row of plastic tiles with raised circles. 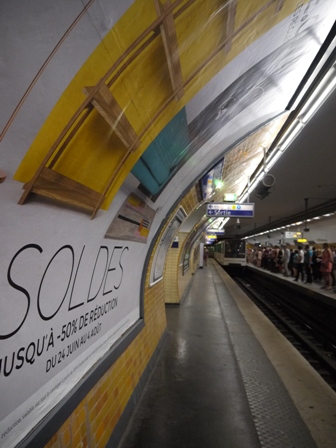 Charles de Gaulle - Étoile is a terminal for the line 6. The platforms are very narrow. Therefore when the metro arrives, it opens the doors on the exit side only. Once the carriages are empty, those doors shut and the doors to the other side open allowing waiting passengers to enter.

The platforms holds less people than would fit in the empty carriages, which is a problem, when there are delays.