Avenue Émile-Zola is situated in the 15e arrondissement. It is named after the French writer and romancier Émile-Zola (1840–1902). He also wrote the open letter "J'accuse - I accuse" in the defense of the Dreyfus affair.

Today it is served by the metro line 10. 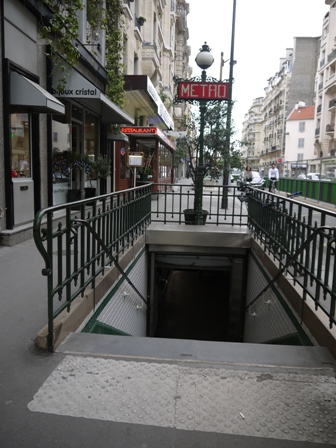 The narrow entrance is surrounded by a green metal enclosure with bars of two different lengths fixed to a stone base.

Metal rails have been fixed to both sides.

The walls are tiled in white ceramic tiles with green border tiles.

At the back of the enclosure is a pole of the typre Val d’Osne. The green pole sports a red sign with cutout white letters METRO and decorated with green filigran patterns. Above it is a white globe lamp with a green crown.

In front of the entrance is a broad band of white plastic with raised circles to mark it for sight-impaired passengers. 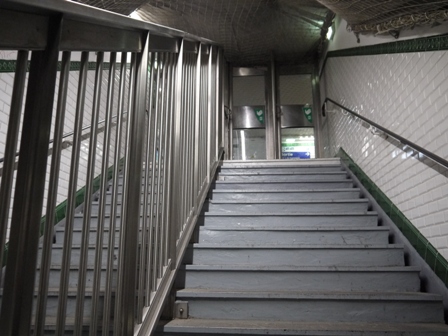 The stairs are divided into two sections by a tall metal fence. One side is for access to the platform, the other for the exit.

On top of the stairs on the exit side are two metal framed doors with glass panels. These have to be pushed by hand to be opened.

Metal rails have been fixed to the walls which are tiled in white ceramic tiles. The border tiles at the bottom are plein green, the ones at the top have a flower pattern in a diamond shape. 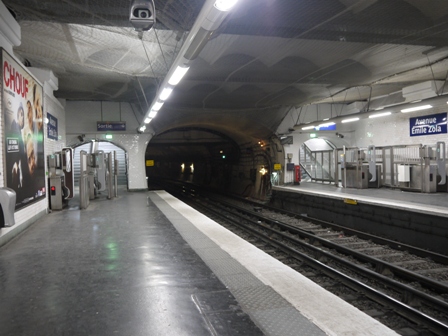 Lighting is provided in the form of a long white tube, opening downwards and fixed by pairs of wires to the ceiling. It runs along the platform edge.

The walls are tiled in small white ceramic tiles with raised centres.

Entrance to the two side platforms is from the end.

One metal barrier with card reader has been placed at the end of the platform.

The ceiling is made of several tiled arches, supported by silver metal beams.

The ground has been painted grey.