The station opened on 27 May 1923. The underground station is named after the battle of Alma against the Russians in 1854 during the Crimean War and General François Séverin Marceau-Desgravier (1769 - 1796), who fought the Revolt in the Vendée during the French Revolution.
The station is situated in the 8th arrondissement. It is served by the metro line 9. 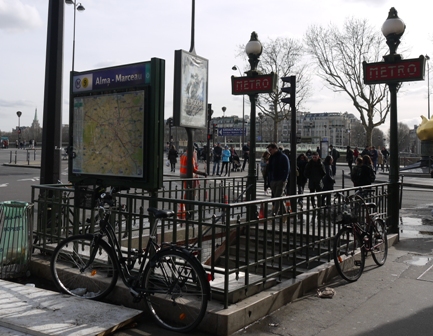 The entrance to the station is flanked by two metro signs.

At the end is a modern illuminated display with a transport map.

The ballustrade is of green straight metal vertical bars. 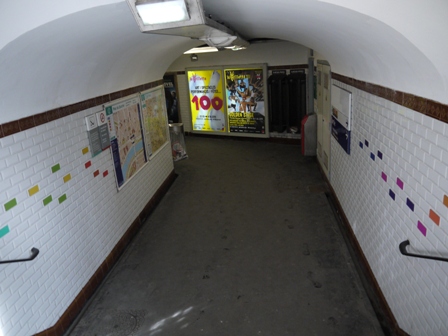 The walls of the corridor are tiled fairly high, the ceiling is painted white. Brightly coloured plastic rectangles have been applied to some of the tiles to give the entrance a cheerful feeling. 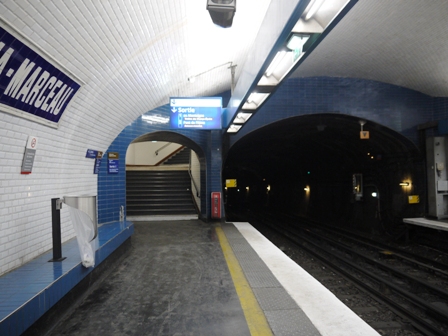 Access to the the platforms is from the end. They are on either side of the tracks.

The walls and the vaulted ceiling are tiled in white rectangular ceramic tiles with a raised centre. The tiles over the tunnel and platfrom entrances are medium blue.

The floor of the platform is covered in grey, slip-resistant paint. To mark the edge, a wide white line, a row of knobbed tiles and a narrow yellow line have been added. 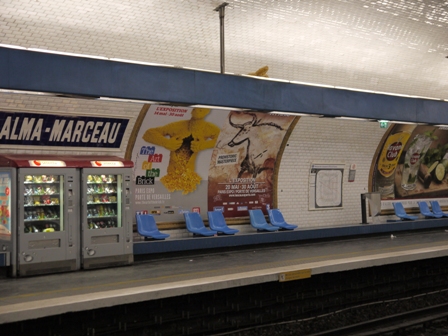 The platform is in the style Andreu-Motte, where some tiles, lights and seats have the same colour. Here blue plastic seats are fixed on bases covered in blue ceramic tiles.

The lights are encased in metal boxes running along the whole of the platform, suspended by metal brackets.

The signage is in a white ceramic frame. The station name is stencilled in white capital letters on dark blue tiles.